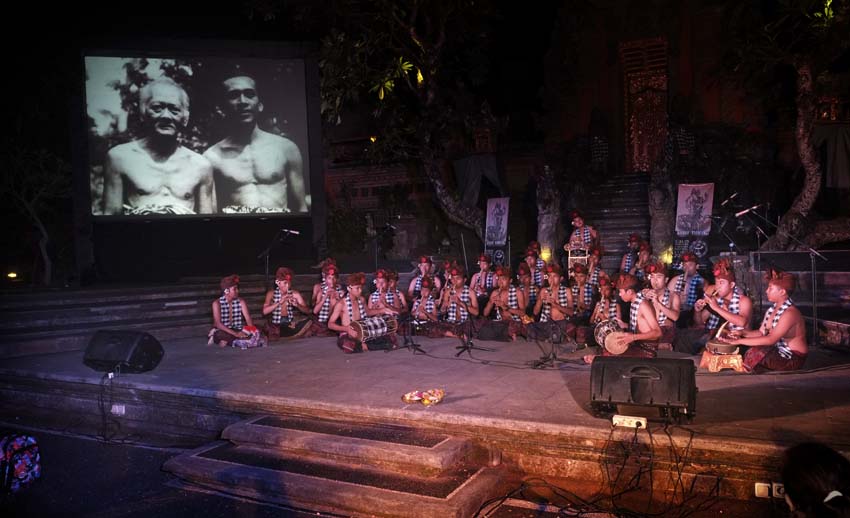 A Tribute to Lempad, and Layers of History #uwrf14

Presented by journalist/social commentator Wayan Juniartha, the event launched with a musical performance by a group of  boys from Padang Tegal whilst slides of Gusti Nyoman Lempad flashed on to the screen, including one of my favorites of him with his son Gusti Made Sumung. Once the music was over Wayan Juniartha, a.k.a. Jun,  introduced the film Lempad of Bali, produced and directed by John Darling and Lorne Blair. As it so happens, yours truly also worked on the production of this film as stills photographer and finding /setting up locations.

It was really touching to watch the film again after some years; the scenes showing Ubud back in 1978/79 particularly stirred a bit of nostalgia. The audience seemed captivated both by Lempad and his work, as well as the various now historical scenes. It felt strange that I, who played such a minor crew role in this film, was the only one of the original crew on stage: both Lorne and John are now long gone, and Made Sumung my old landlord and mentor even longer before them.

When I look back and remember what a struggle it was to make this film for John and Lorne – just getting the material into Bali at the time was no mean feat, and so much volunteer effort by so many people went into it – and see the reaction of people now I  really feel it was worth it.  At one point Jun and I looked back over the crowd and saw people packed right back over bridge.

The scene just before the film started to roll. photo by Anggara Mahendra

After the last credit rolls, Jun invited Agung Rai, Hedi Hinzler and myself to talk about Lempad. Up first, I seized the opportunity to emphasize how important the role of Sumung was to Lempad’s international recognition. I remember distinctly how Gusti Made Sumung guided this film, the long conversations between him and John, his slightly mischievous yet rational explanations. An intriguing man himself, he had attached Dutch high school, taught to analyse in the western manner, yet remained completely Balinese. He used his knowledge of the outside world to be the conduit for his father, both helping Lempad understand the foreigners who arrived on his doorstep, and helping the foreigners understand the enigma that was his father.

Sumung was manager, interpreter, publicist, marketer, but above all loyal son and provider for his clan. The symbiosis of Lempad and his son is often overlooked by many who talk about Lempad’s work.

It is a fact that Lempad was more adaptable to western artistic and architectural esthetics as a result. Hedi Hinzler bore this out in her short talk, somewhat interrupted by the rain that began to spatter down (the organizers swear that weverytime hey do an event on that stage for UWRf it rains!). Hedi pointed to the extensive correspondence that existed amongs the Europeans living in or linked to Bali in the 30s and 40s, how much they discussed Lempad, commissions for him and so forth. Thinking of Lempad as simply isolated in his own culture, creating without any “outside influence” would be a myth.

Gustra of the UWRF team gallantly shelters Agung Rai from the rain with an umbrella nicked from the decor. photo Anggara Mahendra

Agung Rai finished up by stating that no matter what, Lempad for him was a Balinese artistic genius through and through. And at that point the rain got so heavy that UWRFs GUstra simply grabbed one of the decorative umbrellas off the stage and dutifully stood behind Agung Rai and sheltered him from the rain. Turning around again I saw some of the more hardy of the audience huddled under their umbrellas

The evening was meant to continue with poetry readings, kicking off with a poem by poet “Jengki” from Denpasar, but unfortunately the rain washed us out. But tribute to one of Ubud’s greatest sons had been paid, and soon we wandered off yet another Ubud Writers and Readers Festival event.

this post originally appeared on the ubudnowandthen.com blog roll